We've turned what was an overgrown and unused space into the Roost. There are plenty of trees, there's a stream running along the rear of the site and there's a lush view. 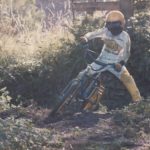 The Roost was Darrel and Kris' playground as kids. It was the home to games of cricket and a diy BMX course. The nearby site of BikePark Wales was their extended playground and the boys explored the mountain on two wheels (motocross rather than mountain bikes).

The name of the village, Troed-y-rhiw, means ‘foot of the slope’ in Welsh and the Roost is located on a hill at the top of the village.

Troedyrhiw has a rich industrial heritage linked to the exploitation of locally abundant coal and iron reserves in the 19 century. Ash Villa and the Dyvenor Arms originally formed part of a terrace of mine workers housing facing the historic Glamorganshire canal.

We’re trying to make The Roost as low impact as possible so whether it’s recycling waste or recycling rain water we’ll be doing it.

We officially opened in October 2019 and unfortunately were closed for a lot of 2020 so we're hoping that 2021 will be better for all of us.

If you've any suggestions as to how we can make the Roost better, please chat to one of us while you're on site or drop us a message.

We look forward to meeting you.

The Roost Merthyr Tydfil is a Visit Wales Quality Assured Glamping Site and has been awarded the Cyclists and Walkers welcome awards.